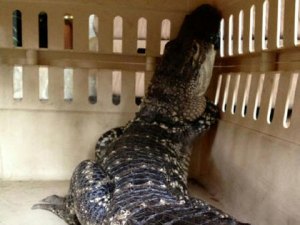 CENTEREACH, N.Y. (CBSNewYork) – There’s a snappy mystery still unfolding on Long Island. Someone has been dumping gators in several neighborhoods.

Yes, gators, as in alligators. And the thought of them roaming free has residents a little skittish, CBS 2’s Jennifer McLogan reported.

The fourth alligator found roaming free on Long Island in five days was found on Friday. It was spotted on a Wading River golf course, captured and carefully removed to the aquarium in Riverhead.

Animal experts said they are concerned for the safety of the community.

“It’s an illegal creature to own in New York State, and for good reason. They get over 10 feet long and 600-800 pounds when they’re fully grown,” Jungle Bob’s pet store naturalist Robert Smith said.

A special permit from the Department of Environmental Conservation has been granted to show the gator for educational purposes.

“These guys make good ambassador animals, good outreach animals, getting the message out there about why they make such terrible pets,” said Justin Ansell of Atlantis Long Island Aquarium.

Naturalists believe someone is purchasing them illegally — as tiny exotic pets — for as little as $25 on the Internet, and when they grow too big for a residential home are dumping the gators where they can attack innocent citizens or are leaving them to suffer or die.

When asked if charges for the perpetrator could be criminal Suffolk SPCA Chief Roy Gross said, “That’s correct: abandonment, endangering the public, and also negligence — three charges they could actually go to jail for.”

Two of the four gators are now being held by a wildlife expert. They are set to be shipped south where they can be supervised on Florida alligator farms. They were found blocks apart in Baldwin, just off Grand Avenue in a supermarket parking lot. Witnesses said they will never forget the sight.

A fourth gator was wandering on a front lawn of a Mastic home. It is now being kept by a licensed handler in a large glass fish tank with special simulated sunlight and special rocks that provide heat. When the gator reaches 5 feet in length, it will be shipped to an alligator sanctuary.

Police said the $2,000 reward to catch the gator dumper is expected to increase if additional alligators are set free in Long Island neighborhoods.

The week’s gator-wrangling total comes to five if you include New York City. On Monday, a Brooklyn couple was charged with harboring a prohibitive animal in New York City when officers found a 3.5-foot gator in the couple’s home while executing a search warrant.

Posted by Scott Stevens at 8:38 AM