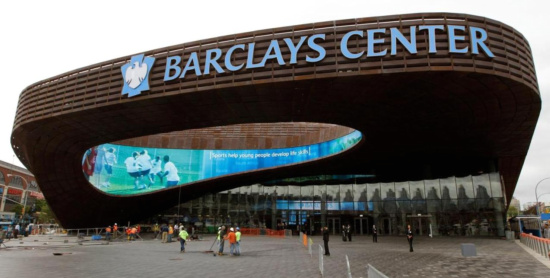 NEW YORK (AP) — Mike Bossy's fondest memories of the New York Islanders will always have Nassau Coliseum as the cherished backdrop, no matter where the team calls home.

That doesn't mean the Hockey Hall of Famer isn't embracing the team's big move to Brooklyn.

Since the day the Islanders entered the NHL in 1972, Nassau Coliseum has been the place for them. It's where they grabbed the hockey spotlight, outshined the big, bad Rangers, and won the Stanley Cup four straight times from 1980-83 in establishing one of the greatest dynasties in sports.

But on Wednesday, the future became all about Brooklyn.

After seven months of negotiations, and offers to move the team out of New York, club owner Charles Wang said the Islanders will relocate to Brooklyn once their lease at Nassau Coliseum expires after the 2014-15 season.

"Today is today, yesterday was yesterday," said Bossy, a top star during the Islanders' glory years. "I have trouble sometimes putting myself in the shoes of the guy who won four Stanley Cups and who scored as many goals as I did because I've moved on and I do other stuff now.

"We did what we did where we did and now that is changing. It doesn't take anything away from what we did. If they would've built a new arena in Nassau County, the Coliseum would've been gone anyway. I always say that whatever you did is always in your heart and in your memories."

The move is hardly shocking and not even unprecedented. The old New York Nets left Nassau Coliseum way back when, relocated to New Jersey, and have moved into their new Brooklyn home — the sparkling Barclays Center that will also house the Islanders beginning in 2015.

Unlike the Nets, who changed their logo and added Brooklyn to their name, the Islanders are sticking to their heritage through and through.

That is important to Bossy, now the Islanders' vice president of corporate partnerships.

"Absolutely," he said. "Charles' main goal was to keep the team local, and he succeeded in doing that. As much as people may be upset because it's not going to be in Nassau County they should be happy because he kept the team in New York."

The Barclays Center sits across the street from the site Brooklyn Dodgers owner Walter O'Malley hoped to put a baseball stadium on to keep his club in New York. He was unable to pull it off, so the Dodgers left Brooklyn for Los Angeles in 1958 and left the borough without a pro sports team until the Nets' arrival this year.

Coincidentally, the Nets hosted the New York Knicks in an NBA preseason game at Nassau Coliseum on Wednesday night.

Real estate developer Bruce Ratner, a minority owner of the Nets, was instrumental in getting the Barclays Center built and paving the way for Brooklyn to re-enter the world of sports in a major way. The building is the main part of a $3.5 billion complex called Atlantic Yards that was built by Ratner's company.

Ratner gave the credit for the Islanders' move to Wang.

"He got offers to move the team out of state — good offers — but Charles wouldn't do that," Ratner said. "Charles is the real hero here today."

Wang wanted to keep the team in New York despite failing to get the Lighthouse Project built on Long Island. That grandiose plan would have included a new arena for the Islanders, but it never got the necessary approval for construction.

Both Wang and NHL Commissioner Gary Bettman stated in the past that the Islanders wouldn't play in Nassau Coliseum one day longer than they had to. Wang said he had serious options to move the team far away, but stuck to his desire to stay.

"We came to the right conclusion," Wang said. "We had many offers that we looked at, but our first priority was we wanted to stay in Nassau County and then in New York."

The Islanders hope this move will help them on and off the ice. The team hasn't reached the playoffs since 2007 and hasn't won a postseason series since 1993.

Wang started Wednesday's festivities in the lobby of the new arena with a bold proclamation of "Hello Brooklyn!"

He will have to wait a few years to finally see his team hit the ice in the intimate building that is expected to hold between 14,500 and 15,000 for hockey. Wang said he has no intention of trying to get out of his Long Island lease early.

Once the Islanders settle into Brooklyn, they will begin a 25-year lease at the Barclays Center.

"The Islanders, I believe, will be strengthened because they were playing in an inadequate facility, and the fan experience here will be much better," Bettman said. "If a franchise is strengthened, that's good for everybody."

And the NHL is certainly looking for any positive news it can get as the 39-day old lockout casts a pall over the hockey world. Bettman couldn't avoid questions about the seemingly imminent announcement that regular-season games will be canceled for good.

Bettman set a deadline of Thursday for a new collective bargaining agreement to be reached with the players' association that would allow for a full 82-game season to be played beginning on Nov. 2. With no negotiations scheduled, and a divide between the sides seemingly growing wider, Bettman conceded that a shortened season is the most likely scenario.

"It looks like the 82-game season is not going to be a reality," the commissioner said

Officials in nearby Nassau County, N.Y., have struggled for years to come up with a plan to either renovate or build a new arena to replace the Nassau Veterans Memorial Coliseum, which opened in 1972. Wang, the founder of a computer software company, presented a plan in 2003 for a privately funded multibillion-dollar development of housing, retail and a new arena on the property, but the proposal foundered amid community opposition.

Wang had long threatened to move the team from its home in Uniondale after the club's lease expired. He complained that the dilapidated building is unsuited for a professional sports franchise.

"I am disappointed, too, but we're here, we're home," Wang said of the decision to leave Long Island. "It's a new place and it's only 35 minutes away by train. Come and join us and see hockey.

"I think fans want a good experience. It's not just about watching hockey it's also the whole ambience of coming to a place where you can get good food and you can see. We have Queens, Manhattan, Brooklyn fans. Westchester might be a little bit harder, but we have them all over the tri-state area."

The Barclays deal took seven months to complete and was finished Tuesday night, according to Wang.

"Brooklyn is big time and now we have the big-league sports to prove it," Mayor Michael Bloomberg said.

As recently as April, Bettman said Brooklyn might not be a viable destination for the Islanders because it's hard to reach for the team's fan base in Long Island and Queens. However, the team's announcement of a news conference at the Barclays Center trumpeted the fact that it is located "atop one of the largest transportation hubs in New York City ... accessible by 11 subway lines, the Long Island Rail Road, and 11 bus lines."

"It took us 25 minutes to get here today," Islanders general manager Garth Snow said. "We didn't turn our back (on fans). This announcement has shown that the key is that we stayed local and we got a first-class facility. We're happy that our fans are still able to come and watch us play as the New York Islanders."

Last year, voters overwhelmingly rejected a referendum — backed by Wang — that would have allowed Nassau County to borrow $400 million to build a new hockey arena. Earlier this year, county officials announced they were seeking proposals to open the 77-acre parcel to any developer interested in proposing new ideas for the site. An announcement on those proposals was expected to be released any day.

County Executive Edward Mangano backed the referendum as a way of keeping the hockey team from leaving, along with spurring economic development and job growth. In a statement, Mangano said an economic team will be formed to redevelop the area around the old arena. He didn't specifically comment on the Islanders.

"I am disappointed to learn of the Islanders' plan to relocate to Brooklyn," Hempstead Town Supervisor Kate Murray said. "They've been a valued part of this region's identity, and we wish the team great success in the future. We hope Long Islanders will continue to cheer for the team."

Long Island fans seemed resigned to the move for a team that won the Stanley Cup every year from 1980 through 1983 but missed the playoffs last season.

Michael Callahan of Huntington said it was a sad day for Nassau County, but "I will probably go to Brooklyn for a game. It is easily accessible by mass transit; that is a big plus. That is also one of the shortfalls of the Coliseum; there is no close train system. That is a big plus; Brooklyn is easy to get to."

Associated Press Writers Jennifer Peltz and Frank Eltman contributed to this report.
Posted by Scott Stevens at 8:10 AM

Email ThisBlogThis!Share to TwitterShare to FacebookShare to Pinterest
Labels: All Posts